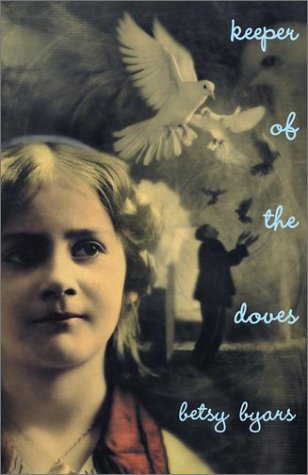 KEEPER OF THE DOVES

Byars () organizes this jewel-like novel into 26 brief chapters, each beginning with a letter of the alphabet, and often resting upon a single image. Amen ("Amie") McBee, born in 1891 and the fifth daughter of a fragile mother and a father who ardently wishes for a son, searches for her place in the family and discovers a talent of her own.

Even before Amie, who narrates, pens her first poem at age six, she shows signs of a poet's sensibility. She admires her sister Augusta, who "knew more words than anyone in the world," and eloquently sums up her bitter aunt: "She seemed to see life as a narrow and dangerous cliff, with charmed objects and correct action all there was to keep you from falling over the edge." Amie grows fascinated with the enigmatic Mr. Tominski, who tends the doves behind the nearby chapel. A seemingly harmless game of hide-and-seek that Amie plays with her devious twin sisters (Arabella and Annabella, dubbed "the Bellas"), in which the person being "it" pretends to be the feared Mr. Tominski, prompts their father to explain the man's importance to him. In tightly constructed scenes such as this, the author slowly and fluidly unspools the small revelations that aid in Amie's understanding of the world around her.

With the arrival of Amie's grandmother (to assist with Amie's mother's pregnancy), the girl begins to blossom: Grandmama calls Amie a "wordsmith" and dispels her fears about Mr. Tominski, unveiling him as a "dove magician." The woman also gives each granddaughter a camera, and the subjects of their photographs reveal much about who they are. Amie, after photographing the lamb on the gravestone of her sister, Anita, who died at 10 days old, discovers Mr. Tominski behind her and photographs him, in what turns out to be a prophetic encounter.

Byars effortlessly links subtle images into a cycle of life—a death comes closely on the heels of the birth of Amie's brother, Adam; an early chapter in which three-year-old Amie names the parts of their dog reverberates at the novel's close, when two-year-old Adam recites the parts of the gravestone lamb. The snippets of Amie's and her family's lives add up to an exquisitely complete picture. Ages 8-12.