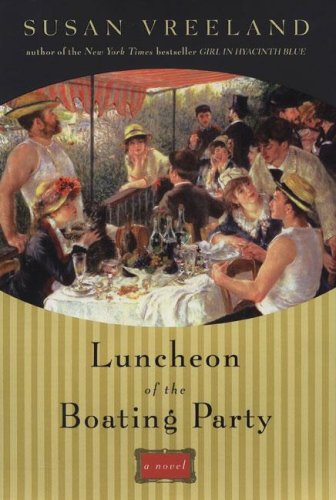 Luncheon of the Boating Party

Imagining the banks of the Seine in the thick of , Vreeland ( ) tracks Auguste Renoir as he conceives, plans and paints the 1880 masterpiece that gives her vivid fourth novel its title. Renoir, then 39, pays the rent on his Montmartre garret by painting "overbred society women in their fussy parlors," but, goaded by negative criticism from Émile Zola, he dreams of doing a breakout work. On July 20, the daughter of a resort innkeeper close to Paris suggests that Auguste paint from the restaurant's terrace. The party of 13 subjects Renoir puts together (with difficulty) eventually spends several Sundays drinking and flirting under the spell of the painter's brush. Renoir, who declares, "I only want to paint women I love," falls desperately for his newest models, while trying to win his last subject back from her rich fiancé. But Auguste and his friends only have two months to catch the light he wants and fend off charges that he and his fellow Impressionists see the world "through rose-colored glasses." Vreeland achieves a detailed and surprising group portrait, individualized and immediate.