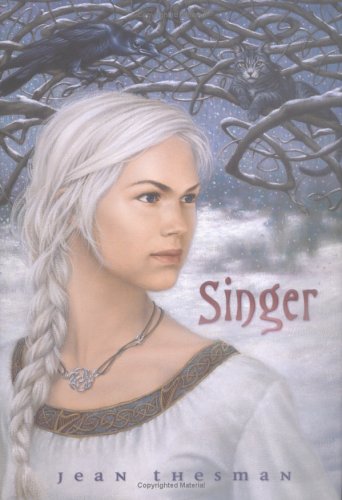 Thesman's ( ) compulsively readable and satisfying medieval fantasy opens with an adrenaline-pumping scene: 12-year-old Gwenore escapes from her mother, the wicked witch Lady Rhiamon (who combines the nastiest qualities of Snow White's stepmother and Lady Macbeth). The heroine's first refuge is an abbey run by resident nuns, a haven for 700 women and girls: "Refugee daughters, runaway brides, wives escaping brutal husbands... women who did not find that their homes were safe places." At the abbey Gwenore learns to read and write, and begins composing and singing her own songs. But the ever-present fear of her mother's vengeance forces Gwenore to move on again, this time to Blessingwood, gracious residence of four accomplished women, widowed when their husbands were killed in a Crusade. There Gwenore adds gardening, medicine, and surgery to her accomplishments. Outside this gentle, feminine oasis of learning and culture the world seems a brutish place indeed: vagrant knights rape local girls, mutilate old men and harass the villagers, while bullying husbands look forward to replacing their wives with younger women. Yet it's a breathtakingly magical world as well, in which tapestries foretell the future, animals speak to those who can hear them, and the shape-shifting Fair Folk dwell alongside the human race. Eventually Gwenore plays out her destiny; perhaps even more significantly, she comes to terms with an ugly childhood and grows into a compassionate, accomplished young woman. Ages 12-up.