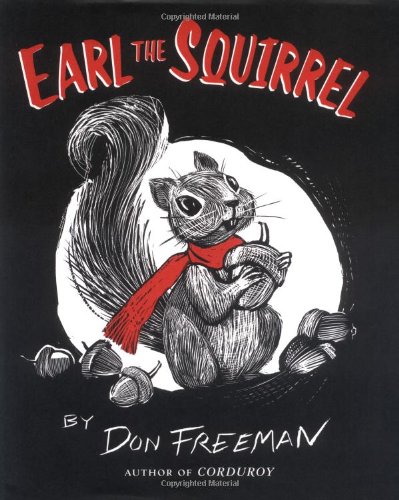 Never before published, this breezy, droll tale from the creator of focuses on a rite of passage for an ingenuous young squirrel. When Earl's mother announces, "It is high time you went out and learned how to find acorns on your own," the carefree fellow instead pays a visit to his friend, a girl named Jill, who gives him an acorn—and a nutcracker to open it. Earl's indignant mother says, in what becomes a refrain, "Earl, come in here this instant. I want to speak to you!" She admonishes her offspring for being spoiled and insists he return the nutcracker. Jill then gives Earl another present—a red scarf she made for her doll. After another rebuke from his mother, Earl fashions a sack from his scarf and goes in search of acorns. Freeman uses his signature scratchboard style, with fine tooling in black and white that plays up both the red scarf (the only additional color, which underscores the item's pivotal role in the tale) and the jet-black night into which Earl ventures on his quest. The Great Horned Owl and Conrad the bull act as key players in Earl's mission, and the comical, nearly calamitous string of events leaves the lucky squirrel with plenty of acorns to make his mother proud. Freeman serves up some laugh-out-loud images, as well as some affecting ones, in a tale well worthy of publication at last. Ages 4-up.