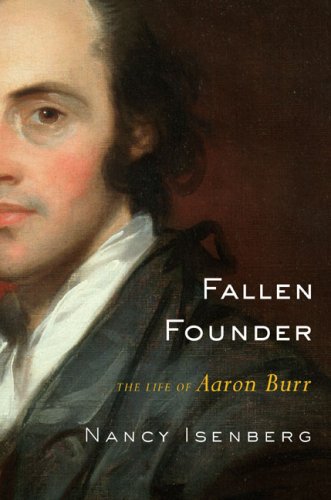 Does Burr belong in the pantheon of founding fathers? Or is he, as historians have asserted ever since he fatally shot Alexander Hamilton in a duel, a faux founder who happened to be in the right place at the right time? Was he really the enigmatic villain, the political schemer who lacked any moral core, the sexual pervert, the cherubic-faced slanderer so beloved of popular imagination? This striking new biography by Isenberg ( ) argues that Burr was, indeed, the real thing, a founder "at the center of nation building" and a "capable leader in New York political circles." Interestingly, if controversially, Isenberg believes Burr was "the only founder to embrace feminism," the only one who "adhered to the ideal that reason should transcend party differences." Far from being an empty vessel, she says, Burr defended freedom of speech, wanted to expand suffrage and was a proponent of equal rights. Burr was not without his faults, she concludes, but then, none of the other founders was entirely angelic, either, and his actions must be viewed in the context of his political times. As this important book reminds us, America's founders behaved like ordinary human beings even when they were performing their extraordinary deeds. Illus.