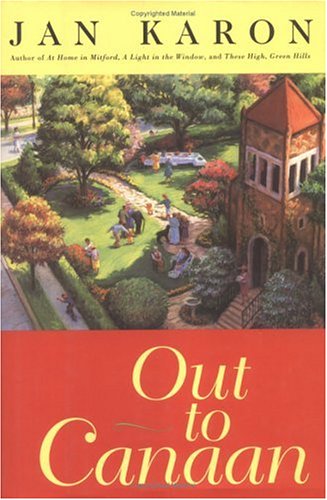 In this fourth book of the Mitford Years series (following At Home with Mitford, A Light in the Window and These High, Green Hills), Karon continues to develop her Heartland of America town. The plot deals with the mayoral race between long-time incumbent Esther Cunningham and newcomer Mack Stroupe. As the two race neck-and-neck for the finish line, the microcosmic Mitford world teems with the small triumphs and crises of Southern rural life. Father Timothy Kavanagh, rector of the Chapel of Our Lord and Savior, his wife, Cynthia, and their young charge, Dooley Barlowe, balance a family life that includes his impending retirement, her Primrose Tea and Dooley's budding interest in the opposite sex. In this church-going community, these and similar concerns share equal billing in civic gossip, centering on Stroupe's plans for development and the ads the locals take out in the town paper in support of Cunningham. But greater than the political reality in Mitford is the Canaan referred to in the title--The Promised Land. With a belief in God's Providence and a sly sense of humor (one character notes that now Abraham's 600-mile trip to Canaan would require four visas), Mitford navigates by a sort of pre-Enlightenment historical compass. Significantly, from the novel's introductory chit-chat about flowers frozen in a cold snap to the announcement of the mayoral tie at the end, old Miss Rose Watson mishears everything that's said--but, in Mitford, does the temporal world really matter? Using an off-handed solution that would shock serious devotees of American politics, the Mitfordites break the electoral stalemate, then turn with relief to their alternate reality of such effortless natural cohesion that, in retrospect, politics seems a mere afterthought, grist for the insatiable rumor mill. Though she makes no attempt to suggest the full scope of the human condition, Karon's devoted readers will undoubtedly adore another upbeat visit to her idealized and endearing corner of America.(May)
close
Details