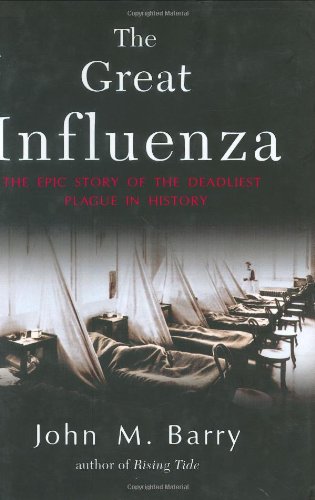 THE GREAT INFLUENZA: The Epic Story of the Deadliest Plague in History

In 1918, a plague swept across the world virtually without warning, killing healthy young adults as well as vulnerable infants and the elderly. Hospitals and morgues were quickly overwhelmed; in Philadelphia, 4,597 people died in one week alone and bodies piled up on the streets to be carted off to mass graves. But this was not the dreaded Black Death—it was "only influenza." In this sweeping history, Barry ( ) explores how the deadly confluence of biology (a swiftly mutating flu virus that can pass between animals and humans) and politics (President Wilson's all-out war effort in WWI) created conditions in which the virus thrived, killing more than 50 million worldwide and perhaps as many as 100 million in just a year. Overcrowded military camps and wide-ranging troop deployments allowed the highly contagious flu to spread quickly; transport ships became "floating caskets." Yet the U.S. government refused to shift priorities away from the war and, in effect, ignored the crisis. Shortages of doctors and nurses hurt military and civilian populations alike, and the ineptitude of public health officials exacerbated the death toll. In Philadelphia, the hardest-hit municipality in the U.S., "the entire city government had done nothing" to either contain the disease or assist afflicted families. Instead, official lies and misinformation, Barry argues, created a climate of "fear... [that] threatened to break the society apart." Barry captures the sense of panic and despair that overwhelmed stricken communities and hits hard at those who failed to use their power to protect the public good. He also describes the work of the dedicated researchers who rushed to find the cause of the disease and create vaccines. Flu shots are widely available today because of their heroic efforts, yet we remain vulnerable to a virus that can mutate to a deadly strain without warning. Society's ability to survive another devastating flu pandemic, Barry argues, is as much a political question as a medical one.