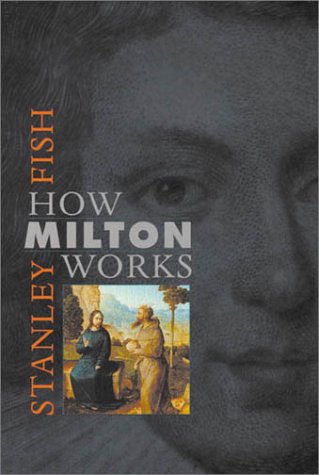 Perhaps more prominent in recent years as a controversial legal theorist (), soldier in the culture wars () and the highest-profile defector from Duke's star-packed '80s English department (he is now a dean at the University of Illinois at Chicago), Fish forcefully reminds us that it is as a reader of John Milton that he first made his mark, with 1967's . That book not only revolutionized Milton criticism, but pioneered the notion of "reader response" as a critical tool. Three and a half decades later, in more than 500 pages of virtuosic close reading, Fish gives us a premodern Milton, in which every element—vocabulary, syntax, line breaks—is directed "from the inside out" toward divine truth. Beginning with the questions "What is Milton about?" "What is Milton's account of knowing and perception?" and "How is Milton to be read?" Fish rarely looks up from Milton's texts, but the details of his readings convey at all times the sweep of the poet's thought, the power of what Fish might call his "containment" of disparate impulses, the grandeur of his religious quest. Milton scholars will definitely have their summer reading cut out for them, but any reader interested in tracking an encounter across time—of one bottomlessly inquisitive, endlessly skeptical 17th-century mind with a similarly oriented, 21st-century critic idiosyncratically charged with belief—would be advised to stash this volume in their beach bag.