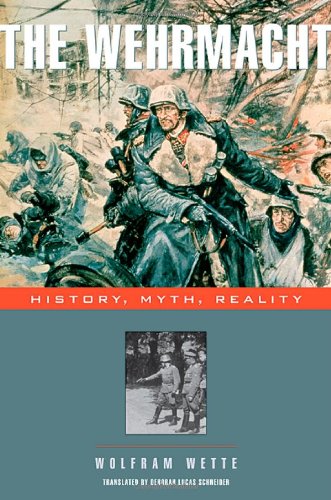 The conventional wisdom that the German army in WWII fought a relatively clean fight, unsullied by the atrocities committed by the Nazi SS, has recently been challenged—and largely demolished. This probing study explores the rise and fall of that myth in the light of scholarship debunking it. Focusing on the Eastern Front, the author contends that the Nazi vision of a racial-ideological death struggle against Slavic hordes and their Jewish-Bolshevik commissars resonated with German officers steeped in traditional anti-Semitic and racist dogmas. Nazi propaganda also swayed millions of soldiers, inuring them to the brutality they would witness and (with a few honorable exceptions, duly noted) participate in.Wette, a historian at the University of Freiburg, notes that the Wehrmacht assisted the SS extermination program, conducted its own mass killings of civilians and castigated the Italian army for refusing to persecute Jews. He goes on to trace the postwar development, fostered by Cold War imperatives and self-serving ex-Wehrmacht generals, of a sanitized legend of Wehrmacht conduct and the controversies that finally undermined it in Germany. More restrained than Daniel Goldhagen's , Wette's hard-hitting indictment also emphasizes the broad culpability of German society for the crimes of the Third Reich.