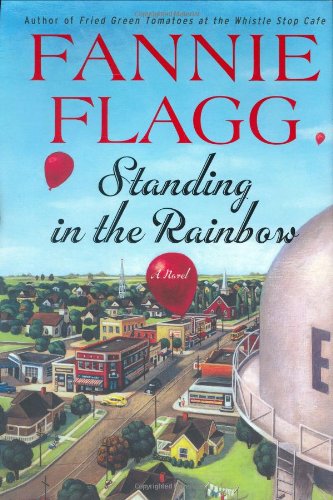 STANDING IN THE RAINBOW

From the talented storyteller whose became a beloved bestseller and a successful film comes a sprawling, feel-good novel with an old-fashioned beginning, middle and end. The predominant setting is tiny Elmwood Springs, Mo., and the protagonist is 10-year-old Bobby Smith, an earnest Cub Scout also capable of sneaking earthworms into his big sister's bed. His father is the town pharmacist and his mother is local radio personality Neighbor Dorothy (whom readers will recognize from Flagg's ). In 1946, Harry Truman presides over a victorious nation anticipating a happy and prosperous future. During the next several decades, the plot expands to include numerous beguiling characters who interact with the Smith family—among them, the Oatman Family Southern Gospel Singers, led by matriarch Minnie, who survive misadventures galore to find fame after an appearance on the Arthur Godfrey show in 1949, the same year Bobby's self-esteem soars when he wins the annual town bubble gum contest. Also on hand are tractor salesman Ham Sparks, who becomes amazingly successful in politics, despite his marriage to overwhelmingly shy Betty Raye Oatman, and well-liked mortician Cecil Figgs, a sponsor of Neighbor Dorothy, who, as a bachelor in the mid-century South, also enjoys a secret life. The effects of changing social mores are handled deftly; historical events as they impact little Elmwood Springs are duly noted, and everything is infused with the good humor and joie de vivre that are Flagg's stock-in-trade.