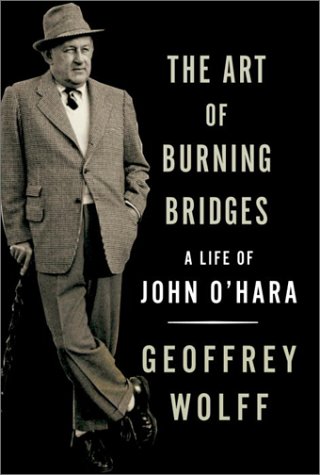 THE ART OF BURNING BRIDGES: A Life of John O'Hara

John O'Hara (1905–1970) was not a nice man. Fueled by alcohol and a lifelong inferiority complex, he bullied everyone in his path. His rages—against women, editors and critics—have become the stuff of literary legend. While admitting his subject's character flaws, Wolff believes they have obscured the quality of O'Hara's best work, particularly the novel and several short stories. But in addition to restoring O'Hara's literary reputation, Wolff has a more personal motive: he details the many ways in which O'Hara reminds him of his own father (memorialized in his notable ), and as much as he declines to reach any conclusions about their similarities, one cannot help thinking that the author's soft take on O'Hara's nasty behavior is informed by respect and compassion for his father's legacy. Wolff refuses to speculate on what drove O'Hara's emotional and artistic life, instead adhering to the facts as much as possible—not that the facts are dull. Wolff weaves an engrossing narrative, taking us from O'Hara's privileged but provincial beginnings as a doctor's son in Pottsville, Pa. (the model for his fictional Gibbsville), to his cocktail years among the New York literati and his stint as a Hollywood script doctor. Wolff offers a clear-eyed analysis of O'Hara's gifts as an acute observer of social manners, with an uncanny ability to illuminate the customs, morals and hypocrisies of the rich and, more tragically, the arrivistes who never quite arrived. This ameliorating biography will go a long way toward mending bridges between O'Hara and his reading public. 8 pages of b&w photos.