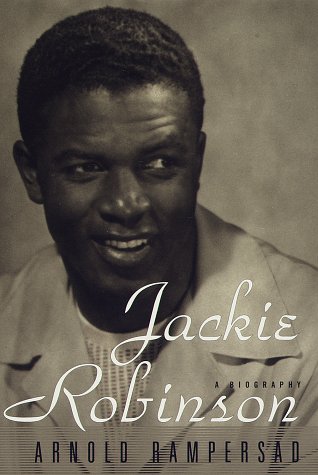 In capturing the life of trailblazing black majorleaguer Jackie Robinson (1919-1972), Rampersad (coauthor with Arthur Ashe of Days of Grace) has found a subject to match his considerable talents as a biographer. Rampersad is the first biographer to be given complete access to Robinson's papers, and his book is a thoroughly researched, gracefully written and vividly told story of one of the country's most gifted, courageous athletes, not only in integrating professional baseball but also in dealing with his stardom and breaking racial barriers in college football, basketball and track at Pasadena Junior College and at UCLA. Robinson was born in rural Georgia, where his mother's family had owned land since the 1870s. His philandering father abandoned the family, and his mother moved with her children to Pasadena, Calif., in 1920, where Jackie and his brother, Mack, also a world-class athlete, began their athletic careers. Rampersad details the influence of Jackie's mother on his principles; his earnest religious devotion; his chaste courtship of his future wife, Rachel (and her own considerable talents as a mother, nurse and hospital administrator and, eventually, as manager of her husband's real estate firm); his military service; and his dissatisfaction with the conditions of Negro league baseball in the 1930s. The second baseman's relationship with Brooklyn Dodger general manager Branch Rickey, architect of his historic challenge to baseball's racial barrier, is well documented, and most significantly, detailed coverage is given to Robinson's transition from superstar baseball player to businessman and passionate civil rights leader. His unprecedented influence continued in politics as a pioneering black power-broker in the presidential campaigns of Eisenhower, Nixon and Rockefeller. Rampersad also writes of Robinson's baseball prowess, re-creating some of the most exciting pennant races ever. Photos. 200,000 first printing; BOMC selection. (Oct.)
close
Details