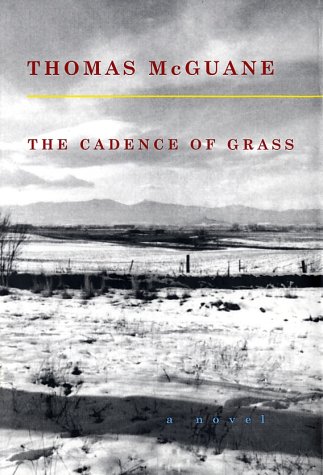 THE CADENCE OF GRASS

McGuane has gone from Florida to Montana novelist, but his most famous novels still date from the beginning of his career. His latest has the hip feel of , without the drugs and hallucinations. Sunny Jim Whitelaw is dead, but he continues to cast a shadow over his family's life. His will requires that his daughter Evelyn patch up her relationship with her no-good husband, Paul—if she doesn't, the ownership and profits of Sunny Jim's Montana bottling plant will be lost. Though Evelyn's sister, Natalie, has had "quality sex" with Paul, she urges her sister to stay married for the good of the family; she herself is itching to divorce her dull husband Stuart. Handsome, treacherous Paul, ("infernal," as his parole officer/lover thinks of him) is barely a year out of prison when Sunny Jim dies and the Whitelaw family and all its wealth seems about to wind up in his lap. The prospect of this is bad enough, but Evelyn and Natalie also have to deal with the revelation that Bill Champion, Sunny Jim's old rancher/partner, means more to their mother, Alice, than they ever suspected. As a friend of Natalie's puts it, "the times had turned against good-hearted party girls." The times have changed for small Montana ranchers like Bill Champion, too, whose involvement in one of Paul's deals is, predictably, a recipe for disaster. McGuane tells this story of the fall, or at least slump, of the house of Whitelaw in his trademark style, a balladic ramble through the consciousnesses of Evelyn, Natalie, Stuart and Paul. On the surface, McGuane's prose is all moral unflappability, but underneath there's clearly a nostalgia for a less self-indulgent culture, one in which people kept to their (preferably stoic) codes.