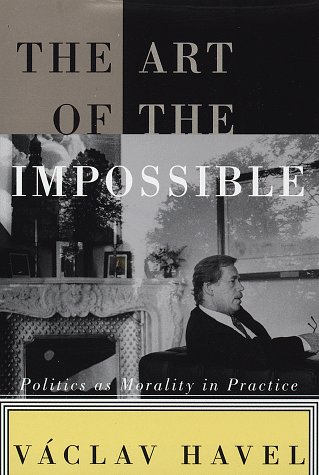 The Art of the Impossible: Politics as Morality in Practice

Playwright, revolutionary, former political prisoner and now president of the Czech Republic, Havel is probably one of the few world leaders who actually writes his own speeches. This collection of 35 of them--delivered between 1990 and 1996 to audiences in Prague, Washington, Jerusalem, Tokyo, Athens, New Delhi, Paris and Los Angeles--is an energizing statement of his activist political and moral (to him, they are the same) philosophy. In the earliest speech, Havel recalls for his countrymen the rosy words they had been hearing from their Communist leaders for the last 40 years. Then, he adds with his usual candor: ""I assume you did not propose me for this office so that I, too, would lie to you. Our country is not flourishing."" The unifying theme of the collection is change (change in Prague, the country as a whole, eastern Europe, Europe and the world), how it must be made to happen wisely, and how to adapt to it. Perhaps the most personal talk in the collection is the last, addressed to the Academy of Performing Arts in Prague, in which Havel discusses both his life as a politician and his life as a writer. The principal translator, Paul Wilson, provides a useful preface to a book whose tenor can be best summed up by the concluding words of the author's Hiroshima talk: ""I will not lose hope."" (May)
close
Details