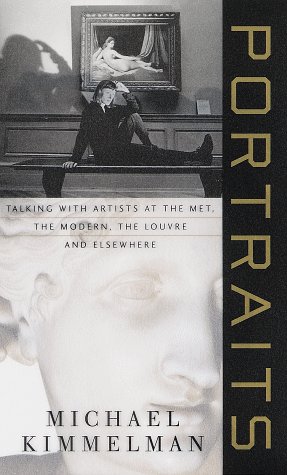 Portraits: Talking with Artists at the Met, the Modern, the Louvre, and Elsewhere

""During the eighties,"" writes New York Times chief art critic Kimmelman, ""art as a journalistic subject became nearly synonymous with the money that poured into it."" In stark contrast, these 16 interviews with 18 artists (two couples), extensively revised and expanded from versions that ran in the Times, wonderfully recover influence, practice and jargon-free theory as points of exchange with artists. Kimmelman's method is to place his subjects--literally--among their artistic forebears. Meeting at major museums, interviewer and interviewee seek out specific works (usually of the artist's choosing) and simply turn the tape recorder on. This is not a new conceit, but it functions brilliantly here as an entree into the work and views of a diverse crowd of working artists. A midnight visit with Lucian Freud to London's National Gallery yields invaluably intimate looks at Chardin, Velasquez and Rembrandt. Parodic photographer Cindy Sherman comes off as a not quite faux naif at New York's Metropolitan Museum of Art, while much heralded portraitist Chuck Close winningly displays his deep knowledge and love of formalism. German-born Hans Haacke shows us the economic ghosts lurking in the Met's aesthetic machine. Kiki Smith, Brice Marden, Richard Serra and married couple Susan Rothenberg and Bruce Nauman are some of the other prominent Americans; Balthus and Henri Cartier-Bresson round out the European contingent, along with Francis Bacon. Although Kimmelman is rarely heard talking back to his subjects, he has shaped the pieces decisively, explaining or expanding on references made by the artists, contextualizing their work and describing, in a quietly opinionated fashion, their persons, manners and the incidentals of the excursions. If his choice of artists is somewhat predictable, what they actually say rarely is, and Kimmelman's no-nonsense presentation highlights their insights. The result is immensely satisfying object lessons in looking at art, both contemporary and inherited. 135 b&w photos throughout, not seen by PW. Editor: Ann Godoff; agent: Suzanne Gluck. (Aug.)
close
Details