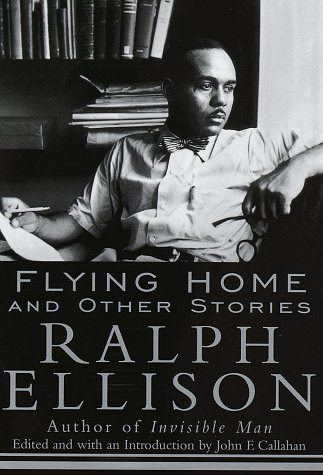 Flying Home: And Other Stories

To read Ellison's early short stories after having read Invisible Man is like looking at the first sketches and blueprints of parts of the Taj Mahal after having stood in the complete palace itself. Most of these 12 early stories (written between 1937 and 1954) are clearly apprentice work in which Ellison is struggling for control of voice, timing and structure. In the earliest work (including ""Hymie's Bull,"" his very first story), Ellison tries to shoehorn his own experience, including hoboing freight trains in the 1930s, into some boxed-in notion of literary form. But Ellison was a fast learner. While the four stories featuring the antics of Buster and Riley, two smart-mouthed African American boys, owe more than a bit to Mark Twain's Huck and Tom, they also show Ellison developing more supple language and a comic touch. ""A Party Down at the Square"" (discovered by Callahan, his literary executor, shortly after the writer's death in 1994), is an account of a lynching breathlessly narrated by a white Cincinnati boy visiting his uncle in Alabama. In the dramatic title story, Todd, a black pilot, a northerner trained at Tuskegee, crash-lands in rural Alabama and is rescued from redneck medics by Jefferson, an old black man exuding rustic ways and folksy tall tales. Though Jefferson represents everything Todd is trying to escape, the old man's wisdom and quick thinking ultimately lead the pilot to a reaffirmation of his roots. In these later stories, the moral core of Ellison's great novel is apparent: the passion for simultaneously exploring black identity and American identity, the determination to write deeply about race without writing only about race. His stories display, individually, the commitment to craft and, collectively, the acquired range that later enabled him to assemble, block by block, one of the great monuments of American literature. (Dec.)
close
Details