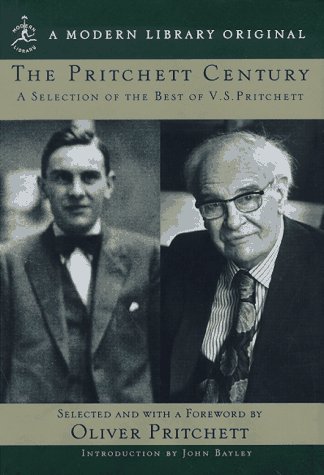 Pritchett, who died this year, felt ""vain"" about being born in 1900, ""at every birthday thinking of myself as pretty well as old as the century."" This memorial omnibus edition (sensitively culled by his son, Oliver) includes essays and short stories, as well as excerpts from Pritchett's novels, travelogues, literary criticism, biographies and autobiographies. Looking back at the events of his lifetime, Pritchett recalled ""[t]he smell of that London of my boyhood and bowler-hatted youth.... A city stinking, rather excitingly, of coal smoke, gas escapes, tanyards, breweries, horse manure and urine."" Yet he was also savvy about postmodern society, in which ""no professional writer becomes famous until his work has been televised or filmed."" An acute portraitist with a genius for psychological nuance, he frequently allows his fictional characters to describe each other: ""Mr. Singh spoke a glittering and palatial English--the beautiful English a snake might speak, it seemed to the family--that made a few pockmarks on his face somehow more noticeable"" (from ""When My Girl Comes Home""). His memoirs, A Cab at the Door and Midnight Oil, as well as his travel pieces on Ireland, Spain and Appalachia, showcase Pritchett's prodigious memory for voices and his quirky visual images. In his writings on other authors, Pritchett reveals the unblinking eye of a stern but sensitive critic. Either as an introduction to Pritchett's work, or as a sampler for the initiated, this volume is a delight. (Dec.) FYI: The volume includes a biographical piece by John Bayley that appeared in the London Review of Books (not seen by PW).
close
Details