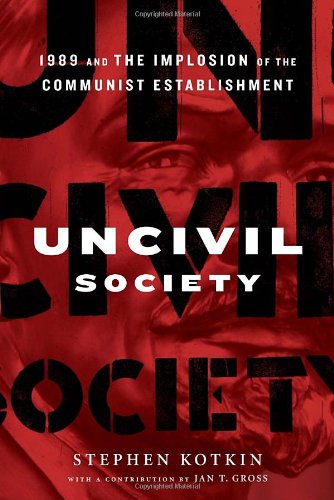 Uncivil Society: 1989 and the Implosion of the Communist Establishment

In 1989, all East European Soviet “satellites” abruptly broke free, triggering a similar breakup inside the U.S.S.R. In this addition to the Modern Library Chronicles series, Princeton history professors Kotkin ( ) and Gross ( ) deliver a perceptive account of how this happened. They deny that freedom-loving citizens (“civil society”) led the transformation, pointing out that, except in Poland, no organized opposition existed. The only true establishment was the “incompetent, blinkered, and ultimately bankrupt” Communist system—an uncivil society. Even in private, all awaited the collapse of capitalism and increasingly focused on the moral superiority of socialism in the face of the unnerving economic superiority of the West. In 1989 the bottom fell out. Polish leaders agreed to a quasi-free election, which unexpectedly voted them out; faced with peaceful demonstrations and a mass exodus of citizens, East German leaders resigned. Except for a bloody attempt to stave off the inevitable in Romania, all satellite governments peacefully dissolved, often with comic-opera ineptness. Combining scholarship with sparkling prose, the authors recount a thoroughly satisfying historical struggle in which the good guys won. 16 pages of b&w photos; maps.