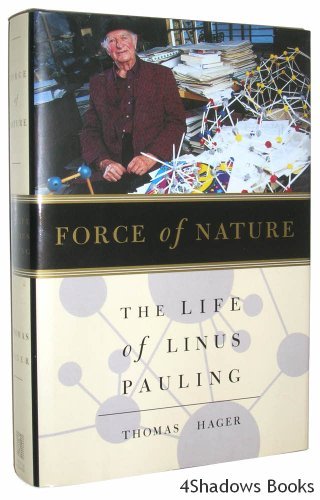 Force of Nature: The Life of Linus Pauling

Linus Pauling (1901-1994), biochemist, peace activist, advocate of nuclear disarmament, champion of vitamin C as a remedy for colds and cancer, was a scientific genius who leaped the boundaries of physics, chemistry, biology and medicine, and in so doing helped to create whole new disciplines including molecular biology and chemical physics. In a balanced, captivating biography, freelance writer Hager skillfully leads the reader through Pauling's pioneering work in fields ranging from quantum theory to crystallography to immunology. Drawing on scores of interviews with Pauling, his family and his colleagues, and on the two-time Nobel Prize-winner's papers, Hager limns a fiercely competitive, emotionally constricted man, irreverent, audacious, sometimes self-righteous and bullying--a more complex figure than his public persona of maverick idealist. Though a self-professed lover of humanity, Pauling practically ignored his own children. His father, an ambitious Oregon druggist, worked himself to death at the age of 32, and his widowed, worn-out, delusional mother was committed to a mental ward shortly before her death. Drawing on a trove of newly declassified government documents, Hager tells the full story of the FBI's harassment and intimidation of Pauling for his leftist politics. (Oct.)
close
Details