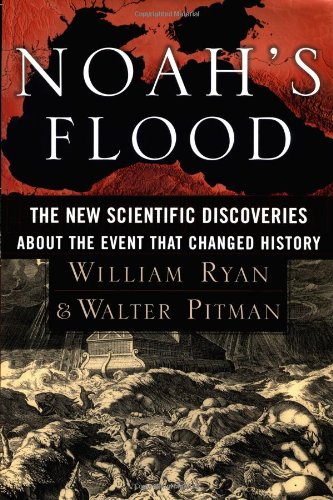 Noah's Flood: The New Scientific Discoveries about the Event That Changed History

Archeologists have long sought to prove that the great flood described in Genesis and in the Babylonian epic of Gilgamesh was a historic event. Columbia University geologists Ryan and Pitman weigh in with a highly conjectural theory that seems as good as any other, if no better. Around 5600 B.C., they maintain, Noah's flood occurred when rising Mediterranean waters roared through the narrow Bosporus Strait, transforming the Black Sea, then a freshwater lake, into a bloated saltwater body. Taking a cue from Australian prehistorian Gordon Childe, who posited that Europe's first farmers came from Asia, the authors contend that the Black Sea at the time of the alleged flood was a fertile oasis, a cultural magnet where diverse peoples--farmers, animal breeders, artisans--exchanged techniques and possibly genes. They point to the sudden appearance in Europe, shortly after 5600 B.C., of ""outsider"" tribes, advanced farmers who, the theory goes, were fleeing the flooded Black Sea region. Other flood refugees, in this scenario, migrated to Russia's steppes, Anatolia, Mesopotamia and the Middle East, preserving memory of the catastrophe in mythic and oral traditions later enshrined on clay tablets and ultimately in the Bible. Ryan and Pitman base their theory partly on radiocarbon dating of marine sediments that they collected in 1993 during a Black Sea expedition and partly on Ice Age climatic patterns, modern linguists' quest for a proto-Indo-European mother tongue and genetic studies of population migrations over the millennia. Their complicated detective tale is intriguing, but much more solid evidence would be required to convince skeptics. Illustrated with drawings by Anastasia Sotiropoulos and maps by William Haxby. Agent, Roger Jellinek. (Jan.)
close
Details