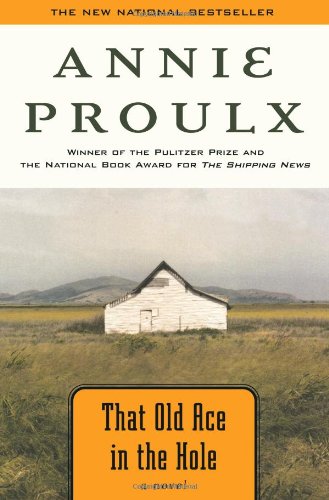 THAT OLD ACE IN THE HOLE

Proulx's people are the hardworking poor who live in bleak, derelict, noisome corners of America where they endure substandard housing, eat bad food and know everybody else's business, going back generations. Most are voluble, in vernacular that sings with regional dialects. All have names that Proulx evidently savors, monikers like LaVon Grace Fronk, Jerky Baum, Habakuk van Melkebeek and Freda Beautyrooms—with personalities to match. The protagonist of her latest novel is the relatively average Bob Dollar (aka Mr. Dime and Mr. Penny), a young man determined to make something of himself, whose boss at the Global Pork Rind corporation, Ribeye Cluke, sends him from Denver to the Texas and Oklahoma panhandle, where he will secretly scout for properties that can be bought for hog farms. As he settles in the town of Wooleybucket, Bob is exposed to the stench that hog farms emit: "a heavy ammoniac stink that burned the eyes and the throat." He also comes to understand the old folks' love of their land, which they've worked through drought, floods, tornadoes and ice storms. Pulitzer Prize–winner Proulx imparts this information with such minute accuracy that it's like seeing a painting up close and magnified, with each tiny brush stroke lovingly emphasized. One grows quite fond of the characters so beset by nature, fate and bizarre accidents, especially old Ace Crouch, a lifelong repairer of windmills, who represents the joke that the title promises. But the novel, which loops ahead and back again in a series of lusty anecdotes, doesn't engage the emotions with the same immediacy as did and . Readers must settle here for a good story steeped in atmosphere, but not a compelling one.