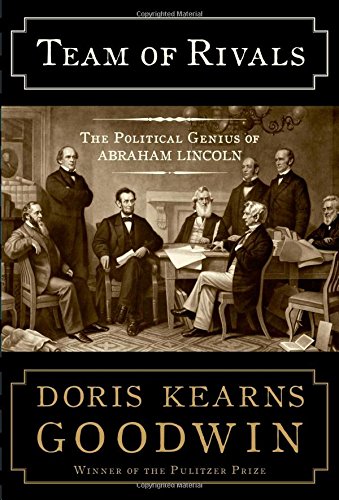 Team of Rivals: The Political Genius of Abraham Lincoln

Pulitzer Prize–winner Goodwin ( ) seeks to illuminate what she interprets as a miraculous event: Lincoln's smooth (and, in her view, rather sudden) transition from underwhelming one-term congressman and prairie lawyer to robust chief executive during a time of crisis. Goodwin marvels at Lincoln's ability to co-opt three better-born, better-educated rivals—each of whom had challenged Lincoln for the 1860 Republican nomination. The three were New York senator William H. Seward, who became secretary of state; Ohio senator Salmon P. Chase, who signed on as secretary of the treasury and later was nominated by Lincoln to be chief justice of the Supreme Court; and Missouri's "distinguished elder statesman" Edward Bates, who served as attorney general. This is the "team of rivals" Goodwin's title refers to.

The problem with this interpretation is that the metamorphosis of Lincoln to Machiavellian master of men that Goodwin presupposes did not in fact occur overnight only as he approached the grim reality of his presidency. The press had labeled candidate Lincoln "a fourth-rate lecturer, who cannot speak good grammar." But East Coast railroad executives, who had long employed Lincoln at huge prices to defend their interests as attorney and lobbyist, knew better. Lincoln was a shrewd political operator and insider long before he entered the White House—a fact Goodwin underplays. On another front, Goodwin's spotlighting of the president's three former rivals tends to undercut that Lincoln's most essential Cabinet-level contacts were not with Seward, Chase and Bates, but rather with secretaries of war Simon Cameron and Edwin Stanton, and Secretary of the Navy Gideon Welles.

These criticisms aside, Goodwin supplies capable biographies of the gentlemen on whom she has chosen to focus, and ably highlights the sometimes tangled dynamics of their "team" within the larger assemblage of Lincoln's full war cabinet.