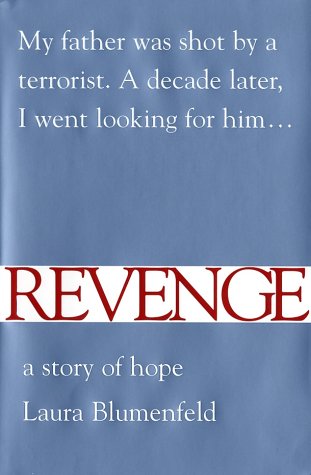 REVENGE: A Story of Hope

At its heart, this remarkable tale is a rite-of-passage story, an intense and deeply personal journey. For newlywed and successful reporter Blumenfeld in 1998, life appeared to be just about perfect. But she had a score to settle. In 1986, the same year her mother declared she wanted a divorce, her father was shot by a Palestinian terrorist while visiting Israel. Fortunately, the young man had poor aim. But the impact on Blumenfeld was dramatic. That year, as a college student, she wrote a poem in which she addressed the shooter: "this hand will find you/ I am his daughter." In 1998, the shooter was released from prison. Blumenfeld saw her chance and grabbed it. She traveled to such places as Bosnia, Sicily and Iran, and interviewed both perpetrators and victims of violence to determine the rituals and rites of revenge. She tracked down and spent hours with the shooter's family, telling them only that she was American journalist working on a book. She and the shooter became pen pals. The book's only flaw, and it's minor, is a sense of detachment, though Blumenfeld is an able and expressive writer and is not sparing when it comes to personal revelations. The climax is astonishingly powerful—a masterfully rendered scene, crackling with the intensity of which great, life-changing drama is made.