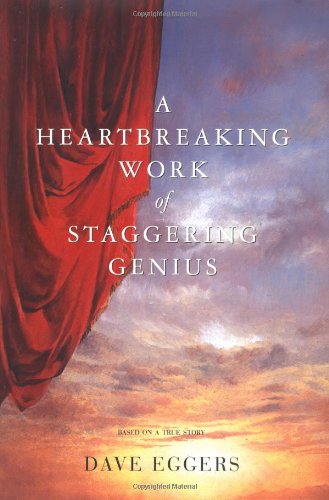 A Heartbreaking Work of Staggering Genius

Literary self-consciousness and technical invention mix unexpectedly in this engaging memoir by Eggers, editor of the literary magazine McSweeney's and the creator of a satiric 'zine called Might, who subverts the conventions of the memoir by questioning his memory, motivations and interpretations so thoroughly that the form itself becomes comic. Despite the layers of ironic hesitation, the reader soon discerns that the emotions informing the book are raw and, more importantly, authentic. After presenting a self-effacing set of ""Rules and Suggestions for the Enjoyment of this Book"" (""Actually, you might want to skip much of the middle, namely pages 209-301"") and an extended, hilarious set of acknowledgments (which include an itemized account of his gross and net book advance), Eggers describes his parents' horrific deaths from cancer within a few weeks of each other during his senior year of college, and his decision to move with his eight year-old brother, Toph, from the suburbs of Chicago to Berkeley, near where his sister, Beth, lives. In California, he manages to care for Toph, work at various jobs, found Might, and even take a star turn on MTV's The Real World. While his is an amazing story, Eggers, now 29, mainly focuses on the ethics of the memoir and of his behavior--his desire to be loved because he is an orphan and admired for caring for his brother versus his fear that he is attempting to profit from his terrible experiences and that he is only sharing his pain in an attempt to dilute it. Though the book is marred by its ending--an unsuccessful parody of teenage rage against the cruel world--it will still delight admirers of structural experimentation and Gen-Xers alike. Agent, Elyse Cheney, Sanford Greenberger Assoc.; 7-city author tour. (Feb.)
close
Details