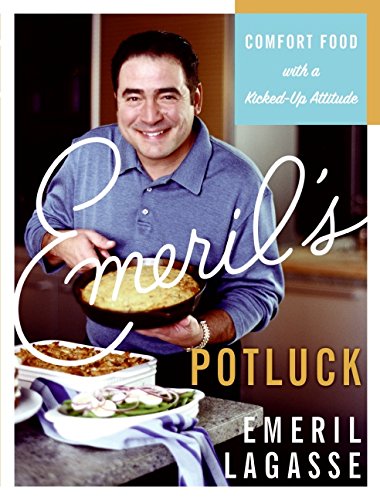 The 10th addition to the Emeril Lagasse cookbook franchise is as uneven as a real potluck dinner: the occasional delicious dish is lost amid all too familiar and unsurprising foods. Admirers will welcome the energetic voice of their favorite TV chef as he "bams!" his way through homey dishes such as Chicken Jambalaya, Macaroni with Four Cheeses, and Tuna Tetrazzini. But it's hard to find anything new, as Emeril retreads ground covered in his earlier books on Louisiana cuisine, party food and cooking for holidays. The "potluck" theme doesn't succeed in tying the book together: though casserole dishes such as Beef Stroganoff and Emerilized Green Beans are ideal potluck offerings, some of the book's most interesting recipes, such as Oysters Rockefeller Soup, Osso Buco with Orzo Risotto, and Olive-Stuffed Leg of Lamb, would be a stretch, especially since there isn't much guidance in helping cooks match such dishes to events. The book's attractive layout and clear instructions are geared to beginners, though there are lapses (a piecrust recipe offers no tips on how to roll out dough; the deviled egg section doesn't even hint how long to hard-boil an egg); and a few recipes, such as Antipasto Pasta Salad, aren't worthy of a chef of Emeril's caliber.