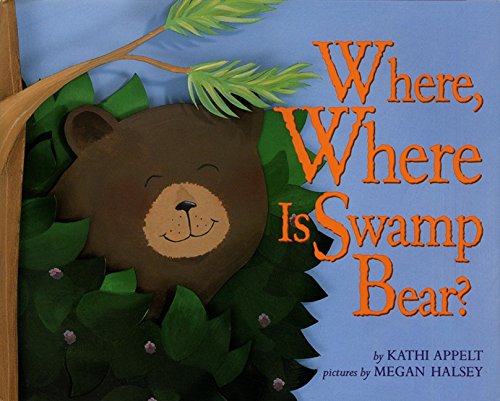 WHERE, WHERE IS SWAMP BEAR?

On a fishing trip with his Granpere through the swamp, a young Cajun named Pierre ponders the life of the elusive (and now endangered) Louisiana black bear. Pierre's grandfather can explain just about everything about this mysterious, lush world, including how tannin in leaves turns the swamp water inky black. ("They fall into the slimy stew, and then, like tea, they steep and brew.") Appelt () infuses the text with a gentle rhyme and rhythm that never intrudes into the subtle science lesson. Although Pierre gets a look at many other swamp creatures, the bear remains unseen, to him and Granpere, at least—attentive readers will spot it on every one of Halsey's () dusky, subtly textured cut-paper spreads. In some scenes, Swamp Bear more obviously gorges on honey or peers out from the bushes; in others, the bear is specter-like, floating in murky water or peering out from behind the roots of a cypress. A final note offers additional details about the species, including the fun fact that it was the model for the original Teddy Bear, and the endpapers identify other indigenous swamp life. Author and artist convey the bond between the two protagonists as effectively as their passion for the ursine subject of the characters' hide-and-seek. Ages 3-7.