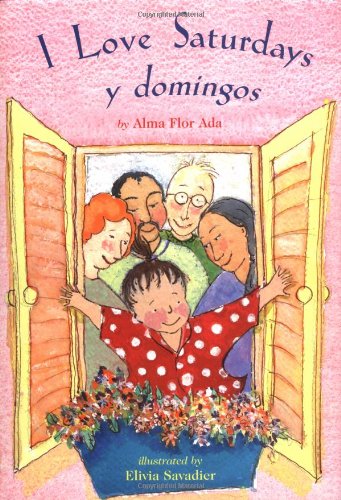 Through this affectionate and revealing portrait of a bilingual girl's weekend visits to her two sets of grandparents, Ada () and Savadier () prove that straddling two worlds can be a blessing rather than a hardship. The left of each spread depicts the narrator spending Saturdays with her paternal grandparents, with whom she speaks English; on the right, she passes (Sundays) with her Mexican-American and and converses in Spanish. The situations in the two households share enough similarities that readers can extrapolate the meaning of the Spanish words in context. For instance, on one spread, the colors of the balloons her paternal grandparents give her also appear in the kite that her makes for her. Each pairing makes for a loving comparison and contrast, enlivened by Savadier's graceful, warm-toned watercolor spot illustrations. At book's end, both sets of grandparents coordinate a cooperative gift for the girl's birthday. The balance tips slightly in and 's favor, in terms of fun and exoticism (e.g., Grandpa and Grandma watch a video about the circus while the Mexican-American grandparents "take me to a real circus"). Youngsters, however, will come away with the idea that this girl is very lucky to have four such interesting people who love her. Ages 4-8.