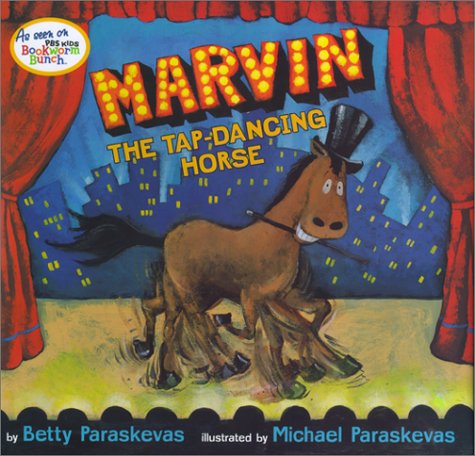 Where their recent offered an unusual Easter Bunny, the Paraskevases' latest is a stale retread about Broadway aspirations. Marvin, a generic black-maned horse, dances with a carnival. He loves his Big Top friends—a weepy pink pig, a showgirl elephant and a tiger that never leaves its cage—yet he yearns for fame. When he meets talent scout Swifty Calico, an orange tomcat in a red suit, Marvin imagines his name in lights. This occasions some corny digs against Swifty: "With hope in his heart and his agent on his back, Marvin headed east, his shoes sparking the pavement." The artist envisions Marvin's success in a conventional spread that pictures newspaper headlines, a tell-all bio and a curtain call with carrots instead of roses ("In less than a year, Marvin was the toast of Broadway"). The text says Marvin wears a "black cape," though he never is seen so attired. Later in the volume, the artwork shows that Marvin has his doubts about the limelight; he looks woeful when surrounded by tuxedoed human revelers and confetti, and a thought balloon reveals that he misses his former home. Surprisingly, few illustrations depict Marvin strutting his stuff, and "tap-dancing" is specified only in the book's title; the collaborators give no dimension to the stock characters, as if the rags-to-riches-to-rags-again cliché were satisfactory. At least on paper, Marvin is a pretty lame hoofer. Ages 5-8.