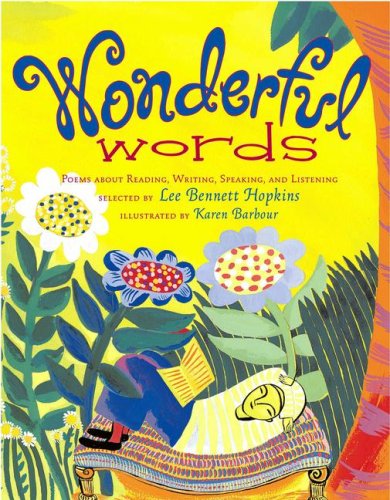 The third book in a series (begun with , also illustrated by Barbour), this picture book collection is a linguistic pleasure. Works by Emily Dickinson, Eve Merriam and Karla Kuskin rub shoulders with poems by Nikki Grimes, David McCord and Hopkins himself. Particularly vivid is Alice Schertle's "Writing Past Midnight" in which the speaker pictures herself writing a poem about a barn and "the sound/ of sheep snoring softly/ blends with the hum of computers/ .../ spiderwebs anchor the edge of my desk to the floor/ a small gray verse runs squeaking down one of the rafters." Unfortunately, Barbour's watercolors, while artistically interesting, sometimes distance readers from the poems. With a few exceptions, such as the stunningly simple illustration for Grimes's "The Dream," the paintings can overwhelm the text, their shapes and figures appearing to compete with rather than complement the richly metaphorical poems. Although the human figures bear varying and multicultural skin tones and costumes, they often share a single expression on their stylized faces. For example, illustrating Carl Sandburg's "Primer Lesson," a crying boy's face is sprinkled with tears, but is otherwise almost identical to the faces of those who taunt him. Nonetheless, Hopkins's selection of poems about words will delight both teachers and children who want to think about the power and satisfaction words and books can bring. Ages 6-11.