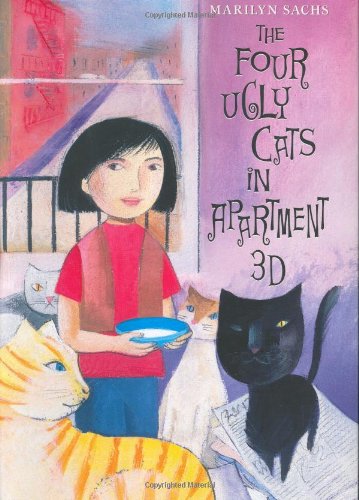 Like everyone else in her building, 10-year-old Lily loathes the man in apartment 3D: "Mr. Freeman was mean, unfriendly, and nasty," she reports as narrator. But when she is locked out of her apartment and none of the other neighbors are home, Mr. Freeman, annoyed by Lily's sobbing, reluctantly invites her in. She watches him feed his four ugly, yowling cats—all of them onetime strays who appeared on his fire escape—and he softens as he talks about them. Not long afterward, the man dies and Lily takes it upon herself to find homes for the cats before the landlord calls the S.P.C.A. Unlike the complex challenges navigated by heroines in Sachs's or , this hurdle is surmounted rather too easily for credibility's sake. The only unexpected development involves a beady-eyed would-be renter who views Mr. Freeman's apartment and seems unduly interested in a pile of the deceased man's papers, convincing Lily (and, less probably, the landlord) that something valuable is hidden there; they are proven wrong. Fans may be disappointed to find the author working in such a minor mode, but, as in any of her books, the writing has its charms. Agreeable entertainment. Ages 8-10. (.)