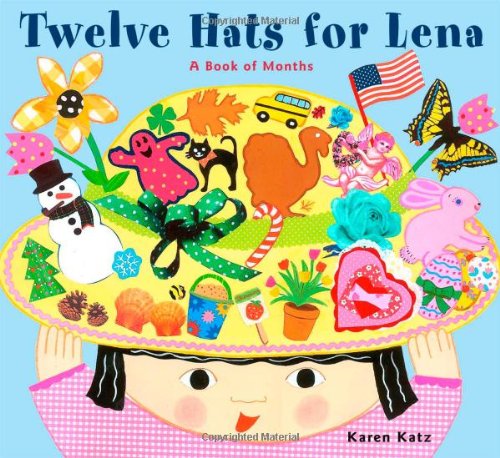 TWELVE HATS FOR LENA: A Book of Months

Young Lena, a fan of fancy headwear, enthusiastically embarks on an arts-and-crafts project to create a hat for each month of the year. She pastes and decorates her various chapeaux with representations of "what makes each month so great." January's stocking cap has a snow theme, depicting snowmen, a sled and a mug of cocoa; December, with its jam-packed holiday docket, poses the biggest challenge—and results in the biggest hat of all, rendered here on a vertical gatefold. Katz's () mixed-media artwork, primarily a combination of gouache and collage, has a kicky brightness that refreshes such traditional subjects as valentines, a spring flower garden, American flags, etc. Unfortunately, the presentation is muddled. The minimal rhyming text, with no more than a few lines per spread, seems aimed at very young readers ("August is the month to collect sand in our pails"), but assumes a familiarity with the names of and symbols associated with seasonal celebrations. For example, her description "March winds swirl and we hear robins sing" doesn't refer to Saint Patrick's Day, yet Lena's hat is a green tribute to shamrocks and pots of gold. The relatively complex instructions for making poster-board hats that appear at book's end, on the other hand, suggest an older audience, but children capable of attempting the paper millinery on their own will likely be turned off by the overly simplistic story. Ages 3-8.