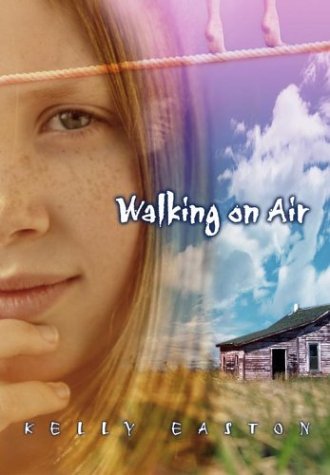 Setting her novel in 1931, Easton ( ) crafts a memorable heroine in narrator June, daughter of a traveling preacher-cum-con artist. June walks a figurative and literal tightrope as she performs in her father's revival show but also catches him spending the collection box money. His hypocrisies go much further: he forbids June to attend school ("What's she gonna learn? That man is descended from apes?" he says derisively) yet strategically outfits her in a "scant" costume for her act. When a past crime catches up with him and lands him in jail for five months, June, her mother and the family's on-again, off-again assistant, the mute Rhett, finally enjoy some stability (and give readers some pretty obvious clues as to Rhett's true identity). Well researched Depression-era details heighten the desperation of June's dysfunctional, secret-ridden family and their transient, hand-to-mouth existence, which includes a stint in a Hooverville. Throughout, June muses on the plights of women in the Bible, the contradictions within her father's brand of religion, the flawed people whom she has met while traveling in carnivals and sideshows, and she ends up forging a faith of her own. The plot accelerates too abruptly from grimness to joy as it nears the conclusion, but along the way Easton ably establishes a complex, highly charged atmosphere and mediates it with sympathy and intelligence. Ages 12-up.