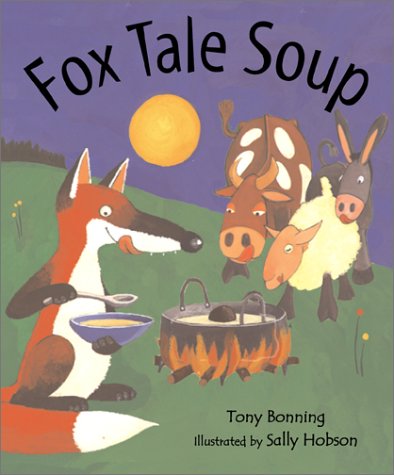 Scottish author Bonning and Hobson () don't change the recipe for the folktale "Stone Soup," but they do serve up a satisfying retelling. Down a dust-brown country road comes a brick-red fox, toting a blue backpack. He stops next to a wall of smooth, round stones, and calls to some farm animals, "Can you spare a little food for a hungry traveler?" When they refuse, the fox empties his backpack—which contains only an iron-gray pot—and "Sheep, who was slightly kinder than the others," gets some water. As the curious animals watch, Fox selects a rock for his soup, then graciously requests a pinch of this and that. As Bonning succinctly describes the sequence, Hobson focuses on each animal's role. Donkey brings a carrot by the greens, and Goat leans forward so that Fox may lift a cabbage off his horn; in the end, all the animals crowd in a semicircle around the bubbling soup, which Fox shares. The illustrator models curved, dense shapes on an opaque field of leafy green, and her full-bleed spreads harmonize with the calm, concise writing. Fox exchanges a smile with his cooperative friends as he takes his leave, confirming the peaceful sense of balance in this time-tested trickster story. Ages 4-8.