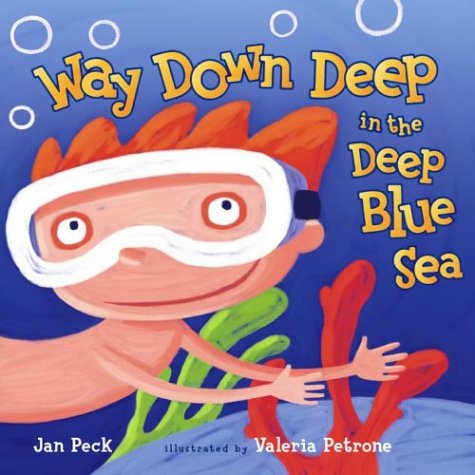 WAY DOWN DEEP IN THE DEEP BLUE SEA

As he hunts for treasure in what is ostensibly the titular locale, the narrator of this familiar-seeming book, a wide-eyed redhead, meets a world of aquatic friends. "Way down deep in the deep blue sea,/ I spy an octopus waving at me," writes Peck ( ), as the boy does an arabesque on one of the creature's undulating appendages. "Hello, octopus./ Gimme eight, octopus./ See you later, octopus." In each bottom-right corner, the words "Swim away" beckon readers to turn the page for another undersea encounter. Finally, the boy spots the golden trove of pirate's booty; unfortunately, a shark with a toothy grin guards it. It's time to make a quick exit—after politely bidding goodbye to his pals, of course—and surface to... the bathroom, where Mom awaits with a fluffy towel, and a final illustration reveals the true identity of the sea creatures (tub toys). Petrone ( ) renders the undersea world in bright, saturated colors and strong, rounded shapes, often giving the boy the exaggeratedly wide face of a Dan Yaccarino character. Given the deliberately repetitive text and the absence of tension, even in the "scary" parts, this book seems best for youngest picture-book fans. Ages 3-6.