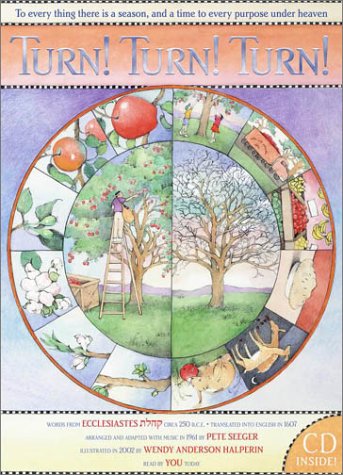 An illustration of the earth (before the title page) serves as backdrop to the complete text of the King James version of the titular passage, with Seeger's refrain ("Turn! Turn! Turn") encircling the globe. On the first page, the opening lines ("To everything there is a season / and a time for every purpose under heaven") form a circular frame around an open door, through which readers view a grassy plain. Each spread that follows features a giant circle divided in half along the center crease, and arranged in a way that encourages readers to literally turn the book; pictures on the left illustrate the first half of the phrase ("a time to plant"), on the right, the second ("a time to reap"). Each semicircle contains numerous smaller illustrations that correspond to a mirror image. For example, a squirrel buries a nut in summer, then finds it in winter; a woman writes a manuscript, then signs copies of her finished book. Some of the images are disturbing (for "a time of hate," someone kicks a dog, and a boy holds a gun), but Halperin () balances these with enough humor and childlike vignettes elsewhere to keep youngsters engaged (for "a time to build up/ a time to break down," bookend paintings show children building a snowman and, the snowman after it has melted). A compact disc containing both Seeger's original song and The Byrds' rendition (tucked into a pocket on the back cover) complements the circle motif. This attractive volume provides a lovely introduction to a timeless verse and a beloved song for a new generation of children, and invites deeper consideration for those already familiar with both. All ages.