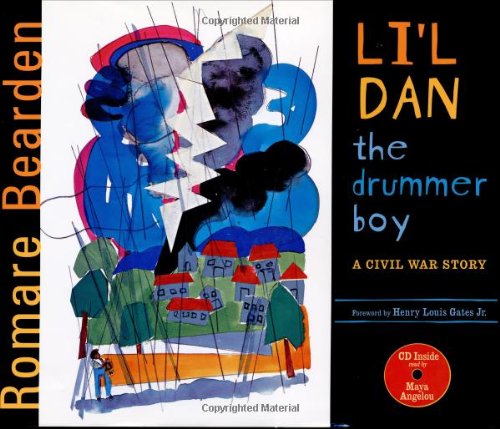 A boy's passion for drumming literally saves lives in this uplifting tale, completed in 1983 and published posthumously—the only children's book that Bearden (1911–1988) both wrote and illustrated. Li'l Dan, whose parents "were sold away when I was most young," loves to hear Mr. Ned play the drum, which the man's father brought from Africa. Mr. Ned teaches Dan to drum, "just the way he had learned from his father," and the boy sets out to make one of his own. Generous white space sets off intimate black line drawings with bold watercolor wash, as Mr. Ned compliments Dan on the drum he made and as Dan communes with the birds and leaves, imitating the sounds they make. In stark contrast, a full-page painting of Li'l Dan gazing over a vast land after the Union soldiers inform him he is free ("What do that mean?" asks the boy) simultaneously evokes a feeling of being overwhelmed and also of possibility. The artwork is more narrative here than in Bearden's illustrations for Herschel Johnson's ; only a very few compositions incorporate collage elements. Here the artist favors simplicity, keeping readers closely involved in the interactions between Dan and Mr. Ned—and ultimately the soldiers who adopt him as their "mascot," and whose lives he saves with an act of ingenuity... and his drum. This story will appeal to history buffs, Bearden fans and those who believe that art can serve as inspiration and sustenance. A CD of Maya Angelou's reading (tucked into the back cover) is an added bonus. All ages.