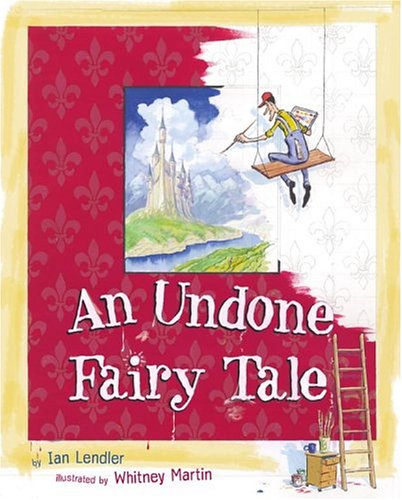 Debut children's author Lendler begins his story in traditional fairytale mode, with a beautiful princess (with a talent for pie-making) locked in a tower, while each knight seeking her hand in marriage fails to perform "three dangerous tasks" set by the king, her stepfather (he wants the pies to himself). When muscular Sir Wilbur arrives at the castle to save the princess, the plot twists: Lendler and artist Martin ( ) introduce, on the edge of the spread, a short, balding bow-tied man, the narrator, as well as tall, thin, paintbrush-wielding Ned, "who's making all the pictures for this story." Henceforth, the narrator repeatedly interrupts the princess–Sir Wilbur narrative to accuse readers of turning pages too quickly, thus precipitating last-minute alterations to the story. Plot and illustrations become increasingly surreal, as when, in lieu of a dragon (who's "still in the shower. He didn't think he'd be needed this soon"), Sir Wilbur fights a giant pretzel, and the princess, having freed herself, harnesses a snail and leads a troop of monkey-knights into battle. The sense of urgency grows (" . Stop. Right. Now. I refuse to let you turn this page") and Ned eventually quits in frustration, necessitating makeshift artwork by the narrator who manages to bring the story to a satisfying conclusion. This slapstick, madcap adventure will tickle many funny bones while offering readers a delightful (albeit deceptive) sense of control. Ages 6-10.