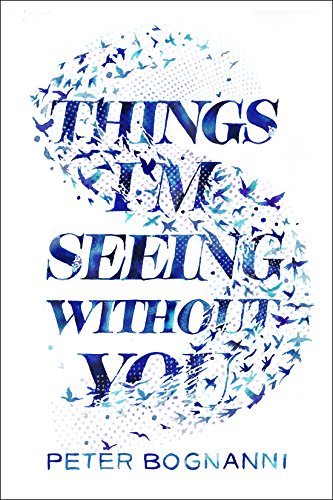 Things I’m Seeing Without You

Seventeen-year-old Tess Fowler’s life comes apart when her online boyfriend, Jonah, commits suicide. She drops out of school to live with her estranged father, who has started a (not terribly successful) business putting together unusual, life-affirming funerals for animals. Tess begins to help her father with the business, and she realizes that a funeral for Jonah is exactly what she needs to move on. When Tess is contacted by Daniel, Jonah’s college roommate and best friend, she learns several surprising things, including that Daniel is in love with her. In his first young adult novel, Bognanni (The House of Tomorrow) tackles several serious issues—including depression, suicide, and digital privacy—in a book disguised as a quirky love story. While he’s successful at building a romantic relationship between Daniel and Tess as they face the aftermath of Jonah’s death, the more difficult subject matter, such as the guilt they both carry, is only touched upon. And Bognanni’s adult characters are largely one-dimensional, particularly Tess’s father, who never moves beyond being a kooky, clueless dad. Ages 14–up. [em]Agent: Kirby Kim, Janklow & Nesbit. (Oct.) [/em]