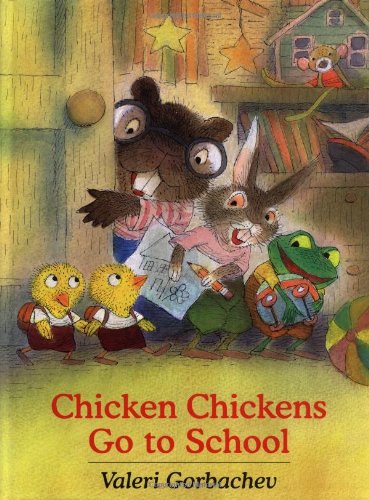 Mother Hen's two adorable offspring from are back, graduating from their debut outing to the playground and moving on to the classroom "for the very first time." Their wide-eyed, furrowed-brow expressions as they cross the street with their mother in a long line of fellow students convey their worry. Their mother and teacher try to defray their concerns ("Don't worry,... I'm sure you will like it here," their mother says; "Don't worry,... I'm sure you will make friends quickly," says Mrs. Heron). But the little chickens' overtures of friendship fall flat: they greet Rabbit at read-aloud time ("Ssssssssh,... I'm listening to the story") and Frog during music ("Ssssssssh,... I'm trying to sing"). Their look of dejection as they eat alone together during snack time is nearly palpable; they dare view their classmates only with a sidelong look and stand in identical postures when they report their progress to their teacher (" 'We can't make any friends,' said the little chickens sadly"). Luckily, Mrs. Heron comes up with just the solution: a class hike over a stream. When the chickens are too chicken to cross, all the classmates who'd unknowingly rejected them earlier come to their aid, and cheer them on when the pair conquer their fear. This comforting book offers reassurance on two counts: the surety of friendship and tackling the newness of the schoolroom. Ages 3-6.