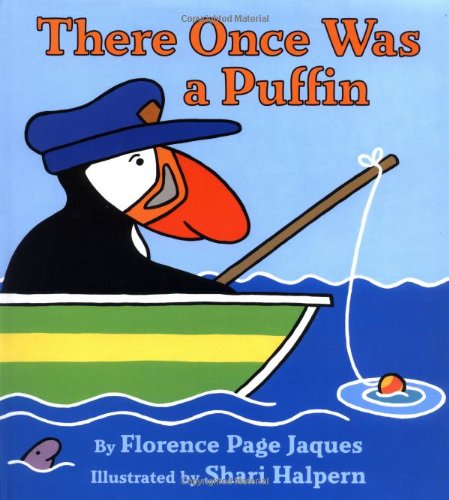 THERE ONCE WAS A PUFFIN

A nonsense poem by the late Jaques (1890–1972) brings out Halpern's ( ) comic spirit in this perky offering. Jaques's protagonist, Puffin, can satisfy his appetite with fish from the sea, but as the sole inhabitant of his rocky little island, he hungers for companionship. Halpern shows the poor bird futilely trying to play against himself in a game of beachfront ping-pong. Then one day, expertly balancing on their tails, "Along came the fishes,/ And they said, 'If you wishes,/ You can have us for playmates,/ Instead of for tea!' " It's an offer Puffin can't refuse. The resulting improbable fun includes a game of croquet, with everyone wearing natty straw boaters, and a session of snowman-making, which finds one fish trying to trap a snowflake on his tongue. As for sustenance, the Puffin now happily eschews seafood in favor of pancakes—in fact, it's clear from the avid fish diners on the final spread that he's become a master of the griddle. Younger readers should take a liking to Jaques's sing-song rhyming and Halpern's bold, simple shapes and bright, saturated colors. Ages 3-6.