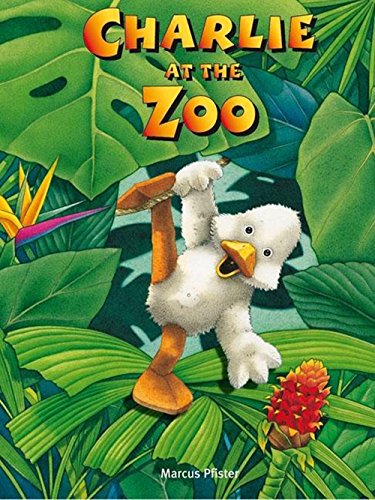 Charlie at the Zoo

Pfister (the Rainbow Fish books) introduces an inquisitive duckling who leaves his mother and siblings to explore the area surrounding their pond. He encounters several animals (none of which the text identifies by name) before a cow (a “brown monster” who has accidentally licked the napping Charlie with her alarmingly large tongue) tells him about a nearby zoo. Charlie decides he wants to go there and dons a baseball cap emblazoned with the word “zoo,” which is inexplicably lying in the reeds. The narrative then switches gears and becomes more factual, providing information about the habits and habitats of animals at the zoo. The graphics carry the book, with elaborately die-cut pages offering a partial glimpse of the animal being described before its identity is revealed. Some visual effects are mildly jarring, among them the anthropomorphized Charlie's resemblance to a stuffed animal, a startling contrast to the realistically rendered zoo animals. But the work is classic Pfister, and his fans will be tickled to accompany Charlie on his first visit to the zoo. Ages 3-up.