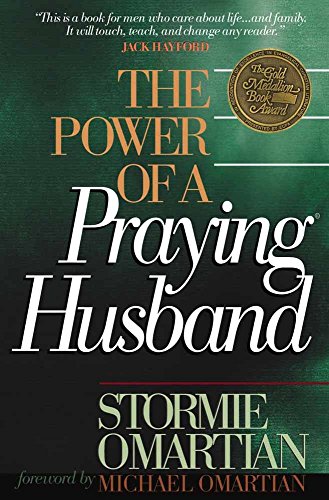 THE POWER OF A PRAYING HUSBAND

Omartian, who has dominated Christian bestseller lists with , is back with a companion volume for hubbies. She urges every husband to pray for his wife—for her emotions, her skills as a mother, her ability to be faithful, her friendships, her sexuality. Along the way, Omartian offers insights about prayer that even non-husbands will benefit from—when we pray with bitterness or hardness of heart, for example, those prayers will not be answered. For those lacking in creativity, Omartian provides, at the end of each chapter, actual prayers for husbands to say. And for those worried about taking husbandly advice from a woman, Omartian has sprinkled the book with the occasional paragraph by her husband, Michael Omartian, and a few other husbands. The book is not flawless; many of the chapters open with an analogy, and some of those analogies are obvious, stereotypically masculine and a tad degrading: your marriage is like a football game, your wife is like a car. This book accepts as a given certain notions about marriage and women's roles that may alienate feminist husbands and wives—men should pray for their wives' submission and obedience; working mothers need a set of prayers specially tailored to the guilt they're bound to feel. But for Christians of the Promise Keepers stripe, Omartian has provided an accessible, direct book on prayer.