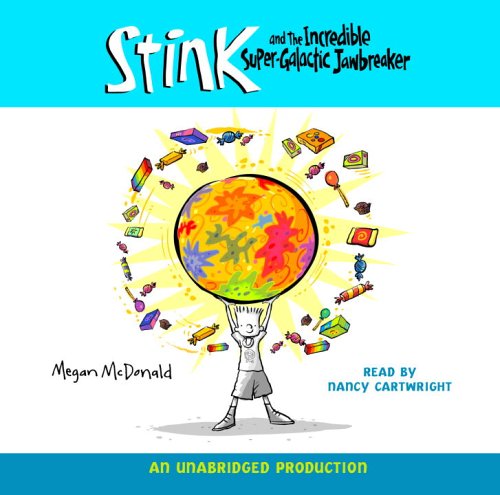 Stink and the Incredible Super-Galactic Jawbreaker

When hearing Cartwright create the voices of McDonald's cast, it's not hard to see why she was chosen as the voice talent for one of the best-known TV characters of all time, Bart Simpson: she has the perfect voice for rebellious kids. Cartwright, who learned her craft from Daws Butler, the performer who gave voice to Huckleberry Hound, Yogi Bear, and many others for Hanna-Barbera, knows from her animation experience how to distill full drama into an audio-only performance. Stink, whom Cartwright depicts as having a chronically stuffed-up nose, is played a tad lower-key than Bart, but he shares the same energetic and buoyant laugh. When he receives 10 pounds of candy in the mail as a result of writing a letter of complaint (his jaw remained unbroken after eating a huge jawbreaker), it inspires a whole letter-writing campaign. In keeping with Stink's kid-like interpretation of things, more than 30 giggle-inducing idioms appear here (e.g. "cost and arm and a leg") which Cartwright reels off at the end of the story, making it not only a boisterously entertaining audiobook, but a delightful educational tool as well. Ages 5-8.