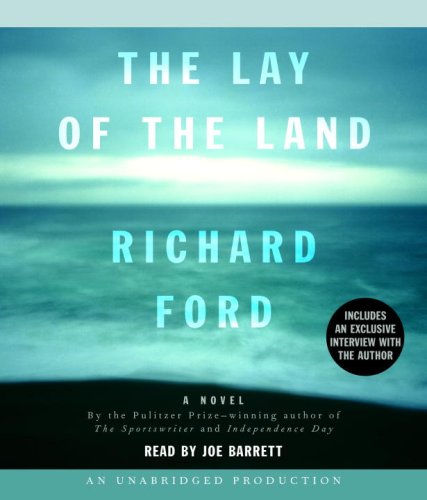 Lay of the Land

Frank Bascombe, Ford's former fiction writer and sports journalist who we have seen age and change since Ford introduced him in 1986's , must be one of the most difficult fictional characters to bring to audio life. His moods and mindsets shift like the shores of his native New Jersey, where at 55 he now sells real estate, and keeping them clear and credible requires a reader of subtle and impeccable judgment. Barrett, a veteran stage, film and television actor, has a voice that should make listeners think they're hearing Frank tell his own story. He catches every nuance from the odd to the tragic, making the breakup of two marriages, a life-threatening disease and the disappointment over a son's career choice as vital a part of Bascombe's story as his strange mental journeys, which are often triggered by headlines or TV news items. A sharp, revealing interview with author Ford is part of this very large, extremely important audio package.