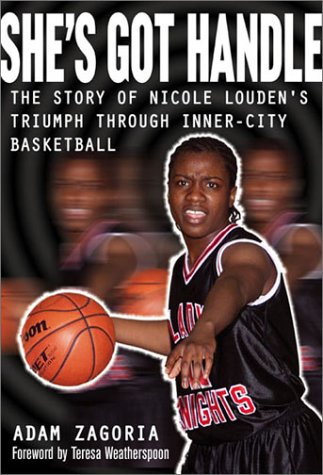 SHE'S GOT HANDLE: The Story of Nicole Louden's Triumph Through Inner-City Basketball

Zagoria's debut book recounts young basketball superstar Nicole Louden's dramas and triumphs on the court and in the high school sections of East Coast sports pages. Beginning in medias res, the well-paced narrative moves from Nicole's time at Nike's camp through the moments when her star begins to rise in Paterson, N.J., with scenes reminiscent of Kotlowitz's . Zagoria, who covered Louden's team as a sports reporter for Passaic County's , details a story similar to the film , making the familiar point that athletic success is often the only American dream that thrives amid cycles of poverty and drug-addled neighborhoods. But the inchoate world of female team-sports stardom is relatively unexplored, and Zagoria, his passion for sports matched by his more recent compassion for female athletes' circumstances, deftly situates Nicole's experience in a broader context preceding and including the WNBA. Nicole, highly accomplished and full of WNBA dreams, rises above the nightly sirens and her own shortcomings—namely, her insatiable hunger for playing time despite injuries and a fatigue. She endures three coaches in as many years, survives the death of her grandfather and plays round ball with a team more comfortable letting her have the ball than they are playing to win. Moreover, she is courted by dozens of colleges looking for "the next Michael." Readers will appreciate Zagoria's strong, clean writing and thoughtful enthusiasm for "the revolution in women's sports." A foreword by WNBA pioneer and Liberty guard Teresa Weatherspoon will attract attention. 16 pages b&w photos.