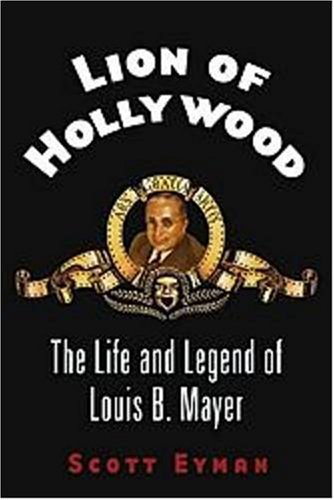 LION OF HOLLYWOOD: The Life and Legend of Louis B. Mayer

Anyone who's heard one of the legions of tales about obstinate Hollywood founding father Mayer's tyranny over his stars (and the entire studio system) won't be surprised to learn Mayer grew up selling scrap machinery in the eastern Canadian port town of Saint John: "Junk dealing itself made [Mayer] endlessly resourceful and opportunistic," Eyman ( ) writes in this meticulous and engaging biography. But because Mayer (1885–1957) was a Russian Jew selling scrap metal and was looked down upon by many, he developed his "almost feral belligerence" early on. That ruthlessness may explain his unprecedented consolidation of power once he arrived in Los Angeles in 1918, but not his genius for packaging and selling the nascent and suspicious medium of film to audiences. Mayer's maudlin sentimentality about American values and the virtues of family life (despite major womanizing) surfaced in most of the films he oversaw at Metro-Goldwyn-Mayer—and in what he did to get them made. Mayer's "mania for quality" drove MGM to the top of Hollywood's studio system, while his melodramatic fainting spells and crying jags would frequently induce fellow executives or stars to relent. Eyman's extensive knowledge of old Hollywood, his scrupulous research and his refusal to indict the often-pilloried Mayer make this biography an often revelatory delight.