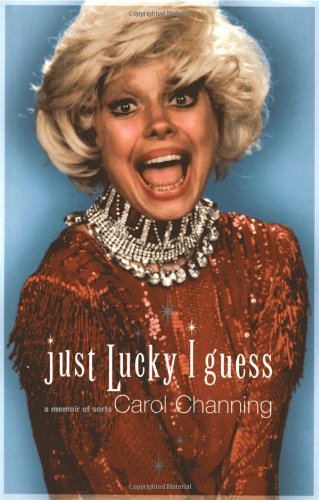 JUST LUCKY I GUESS: A Memoir of Sorts

Broadway's original Lorelei Lee and Dolly Levi recounts her charmed life, making her success sound like the perfectly normal outcome for a nearly six-foot-tall girl who used to deliver the to San Francisco back stages. A veritable platter of patter, her memoir is laced with off-the-cuff openings like "Now, do you want to know..." and "Let me tell you..." Famous names are not dropped as much as unavoidably run into as Channing—now 81—charts the events of her life, such as the process of mounting with composer Jule Styne, lyricist Leo Robin, writer Anita Loos, actress Tallulah "Talloo" Bankhead, composer Richard Rodgers and, as consultants, Alfred Lunt and Lynn Fontanne. As much as it is a memoir, Channing's book is also a valediction to her old friends, many of whom, like George Burns and Loretta Young, are gone. As she writes of their qualities, she straightforwardly tells readers what she learned from or enjoyed about them. Louis Armstrong was kind, Jimmy Durante generous and Barbra Streisand admirable, despite having peeved Channing by "kidnapping" her "baby"—the role of Dolly for the movie version of (which flopped, Channing happily adds). The mix of plainness, largesse and purpose doesn't make for the most scintillating memoir (there's not much about her marriages, for example), but that seems true to the persona and perhaps to the person herself. Chatty and colorful, it's like having Channing as the only guest on an afternoon talk show—a big treat for the right person. Photos not seen by .