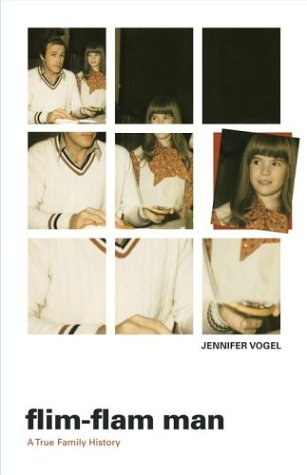 Armed robber, arsonist, counterfeiter—words that describe a hardened criminal or dear old dad? In Vogel's case, both. The author traces the criminal career of her father, John Vogel, through her own relationship with him. As the favorite of three children, she is able to gain special access to the inner workings of her father's dangerous life as well as glean his intense affection. A kid growing up in the 1970s, Vogel realizes her father has a penchant for the finer things in life, but lacks the access or the wherewithal to achieve his goals. "Dad had never been interested in the slow, dutiful mechanics of becoming successful—only in the serene, wrapped-in-cashmere end result. The way he saw it, you were either a garbage collector or a CEO. He was too impatient." John's impatience manifests itself in different get-rich-quick schemes, pie-in-the-sky inventions and plans that never quite pay off. His drinking and drug use intensify over the years of disappointment, contributing further to his despair. Yet he remains devoted to his daughter, imparting to her his sense of sentimentality. Vogel suffers her own bumps in the road as a teenager, but unlike her father, she's able to pull herself back on track, completing college and becoming a journalist (she later finds work as an investigative reporter in Minneapolis). Her heartbreaking memoir is an attempt to better understand John Vogel, a classical music–loving convicted felon, adoring father and bank robber. She tells a powerful story while investigating their complex relationship, writing with empathy and without excuses.