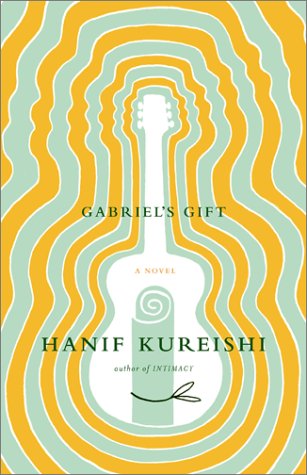 In 1999, Kureishi set teacups rattling in England with , a sexually explicit novella about an extramarital affair, with possible real-life parallels. Here he concocts an appealing, deceptively breezy coming-of-age story recalling his screenplays (; ) in its tender evocation of London-area grunge. Since Mum banished Dad three months ago, 15-year-old Gabriel Bunch has been on the equivalent of house arrest. Nannied to death by hairy Hannah, a refugee from the Communist town of "Bronchitis," Gabriel copes by smoking pot, talking to his dead twin brother, Archie, and drawing objects that disturbingly come to life. Then his dad, Rex, a '60s-era guitarist now wallowing in a squalid bedsit, gets a call from Lester Jones, a David Bowie–like rock god who still packs 'em in. Rex brings Gabriel to meet Lester, who recognizes Gabriel's artistic gifts and gives him a painting that soon becomes central to a virtual custody battle between Mum and Dad—and Gabriel himself. The plot is a familiar domestic triangle, as the parents vie for Gabriel's allegiance. But all three Bunches are rich characters capable of sudden growth spurts and surrounded by a crowd of psychedelically colorful friends and associates. Kureishi's loose, loopy style will keep readers off-balance ("She was a person around whom different odors seemed to congregate, like bums on a street corner"). Yet behind the apparent artlessness, this is a shrewd, warmly imagined portrayal of the healing powers of art.