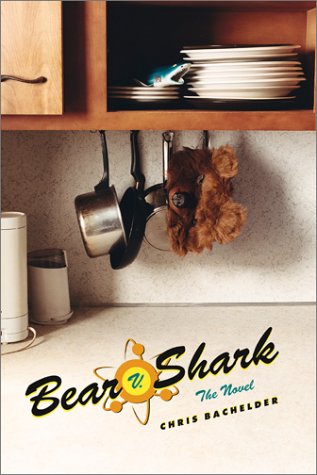 Reading like Don DeLillo on acid, Bachelder's brilliant, bizarre debut is a futuristic one-joke novel about a whimsical confrontation between two unlikely predators. The premise is simple: "Bear v. Shark" is a monster pay-per-view event staged in Las Vegas in which a bear and a shark fight it out in a tank of water deep enough for the shark to maneuver efficiently, but shallow enough to give the bear an even chance to hold its own. Most of the novel consists of Bachelder examining the event via an acidic, over-the-top running commentary and skewering American culture and the consumer-driven media overload that dominates modern life. The plot, such as it is, covers the cross-country journey of the Normans, a numbed-out, statistically average family who acquire tickets to the show when one of the two sons wins a promotional essay contest about the significance of the event. The story line has some mildly entertaining moments like Bachelder's depiction of Mr. Norman's growing existential ennui as he rounds the bend into a midlife dominated by the advertising-driven acquisition of contemporary gadgets and possessions. What makes the novel work, though, is the author's thought-provoking commentary, alternately hysterical, penetrating and weird, as he discusses weather channels, breakfast cereals, ESP TV and some of the other flotsam and jetsam that appears over the airwaves. Bachelder paints himself into a corner with an anticlimactic ending that hinges on the outcome of the battle, and the paper-thin plot doesn't hold up. But there's plenty of meat in the satiric humor and over-the-top commentary, making this a wildly entertaining cultural roller-coaster ride.